As Afghanistan’s US dollar reserves remain illegally frozen by the Biden administration, the Chinese civil society ramped up emergency humanitarian assistance work to Afghan families under severe threat through donations of food and cash, alongside batches of Chinese governmental aid packages, to help relieve the most severe of local humanitarian crises.

Since February 16, a group of Chinese philanthropists launched a fundraising campaign, collecting about 200,000 yuan ($31,449) to buy foodstuff for distribution to at-risk families – especially doctors and teachers’ families in Kabul and Kandahar province, which has helped at least 400 local workers from the education and health sectors.

Chinese State Councilor and Foreign Minister Wang Yi said on March 7 the provision of additional assistance according to the needs of locals, while calling for an immediate lifting of the US freezing of Afghan assets and unilateral sanctions to avoid “secondary harm” to the Afghan people.

The Global Times’ online petition demanding US to unconditionally return the cash lifeline to Afghans has received more than 421,100 signatures by March 14, which a Chinese Foreign Ministry spokesperson previously said fully reflected that the theft of Afghan assets by the US has sparked strong outrage.

Widespread global criticism notwithstanding, the Biden administration has turned a blind eye to the humanitarian crisis facing Afghanistan. Observers said that US-led sanctions and illegal asset freezing has worsened the situation of the war-torn country and left a US legacy of famine in the country. 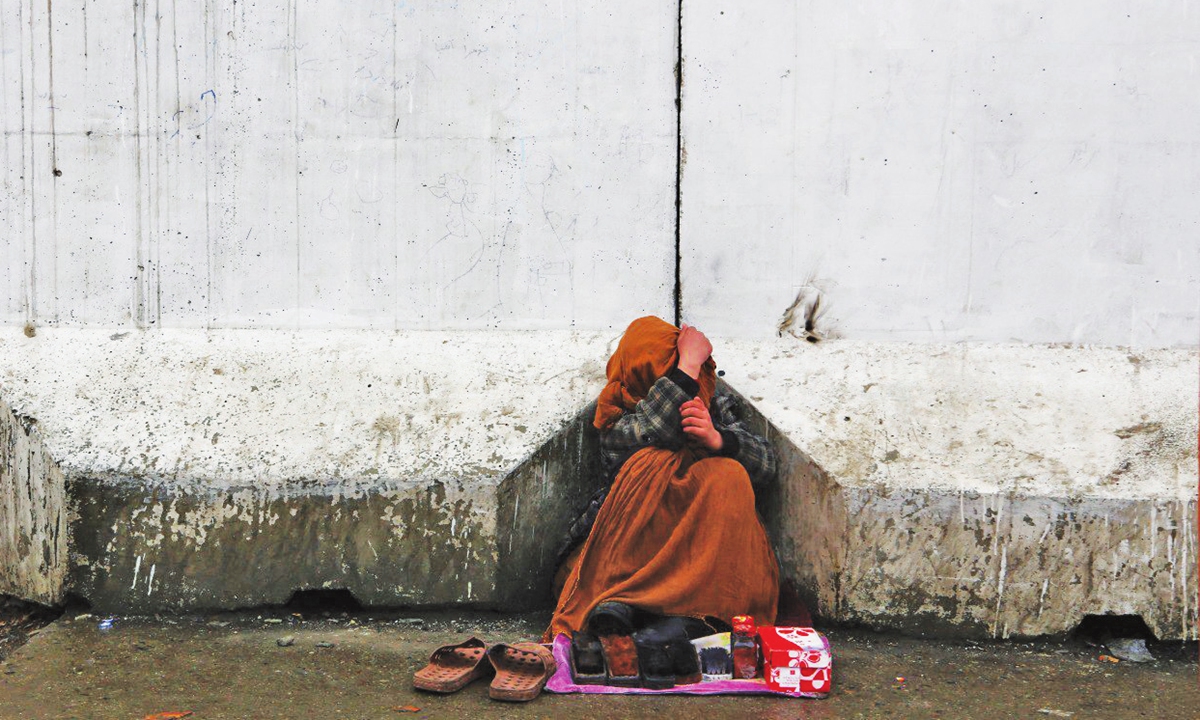 As an effective way to deliver the ongoing support Afghans need, a group of Chinese philanthropists sent a representative, Wang Duanyong, in late February to distribute the supplies to distributed supplies bought with Chinese donations to about 350 teachers from more than 200 schools in dire conditions, each with a bag of flour and a bucket of cooking oil.

“The income of primary and secondary school teachers has always been relatively low. Some of the teachers who are supported by us live in the slums high in the mountains. The cost of living is so high in winter that even their rent is two months behind. Another female teacher who received aid said they were running out of food until they received our donated flour, and said they can finally cook their children naan bread,” Wang told the Global Times.

“Our aid leans more toward female teachers, because the closure of some girls’ schools is putting such teachers at greater risk in terms of survival. Of the 22,000 primary and secondary school teachers in Kabul, 17,000 are women,” Wang explained.

The fund-raising campaign was initiated by Shenzhen-based consultation firm Keen Risk Solution and Chongqing Alumni Association from the Southwest University of Political Science and Law.

Wang, also an associate researcher at the Shanghai International Studies University, concluded a field trip and on-site inspection in Afghanistan in November 2021 to learn more about how Afghanistan is facing a mounting humanitarian crisis. 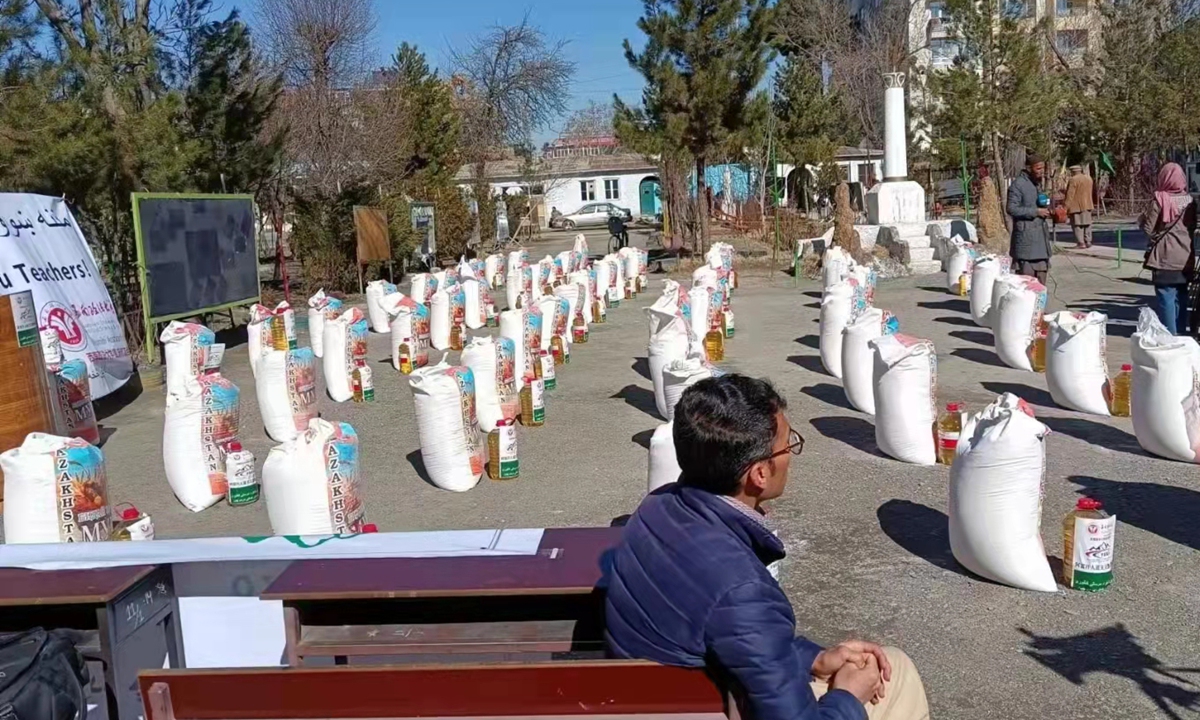 Chinese government has been among the earliest donators to extend aid to Afghanistan.

China has donated a batch of core relief supplies through the South-South Cooperation Assistance Fund in cooperation with UNHCR, which arrived in Afghanistan in November 2021 and helped the displaced, returnees, and host communities in Afghanistan brace for the harsh winter.

The Red Cross Society of China also donated 130 metric tons of flour to its Afghan counterpart to help the country through its severe food crisis in early February.

On February 23, the Ministry of Agriculture and Rural Affairs of China provided an avenue for the World Food Program (WFP) to deliver humanitarian relief supplies to Afghanistan, and helped 115 emergency trucks purchased by WFP in China to leave the country from Khorgos port in Xinjiang Uygur Autonomous Region and finally arrive in Afghanistan.

The resources provided by China to Afghanistan are helping the internally displaced Afghans to endure the harsh winter and COVID-19 pandemic, while China’s engagement at political levels could facilitate a long-term solution in the country, Indrika Ratwatte, a senior official at the UN refugee agency has said.

China’s increasing support and contribution to the UNHCR and other relief efforts through both bilateral and multilateral avenues are greatly welcome, Ratwatte said.

Global supports have largely been suspended after the Taliban government took power in August 2021, and the country’s US dollar reserves remain frozen to date. This means that the banking system is non-functional and the economy is in freefall compounding the likelihood of famine exacerbated by the most severe drought in many years and lack of funds. Lack of funding means government salaries are going unpaid with a direct impact on basic services such as healthcare and education, according to Afghanaid, a global humanitarian NGO.

Wang and his fellow traveler Zheng Gang, head of the Keen Risk Solution who visited Kandahar in November 2021, used their personal savings to provide modest help to 70 local workers of the Chinese-build Mirwais Regional Hospital in Kandahar province with supplies worth about $3,000.

The hospital, the largest public hospital in the region, serves millions of people in the region, but two-thirds of its staff has not been paid for nearly five months, Zheng, another initiator of the fund-raising campaign, told the Global Times.

“Various sectors of Chinese society are paying close attention to the crisis in Afghanistan. Also as a teacher, I hope that Afghanistan’s education sector will soon return to peace and prosperity. Afghanistan and China are neighbors. We are not saviors, but partners,” said Wang.

“In fact, many in China are interested in making private donations to the Afghans. But we did not accept all of it, because aid is a highly professional job. And it is better to help Afghanistan with targeted poverty alleviation than to donate blindly. Aid should be practical and fully cognizant of local needs,” Wang said. 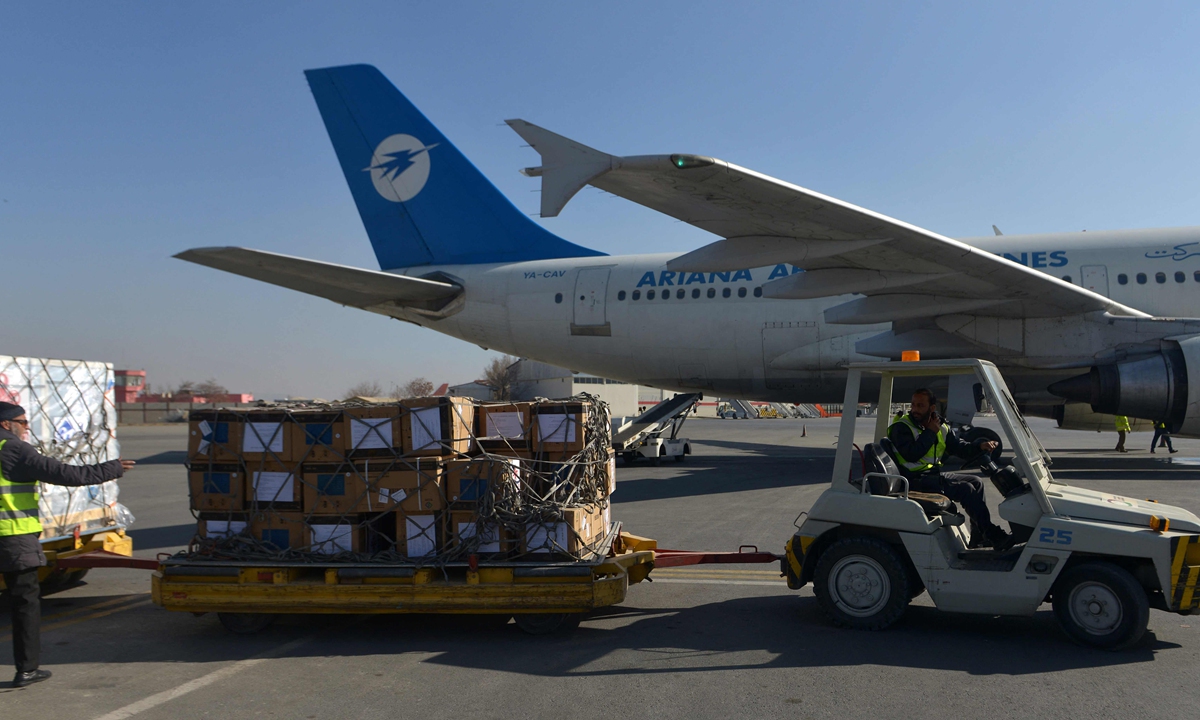 Workers prepare to transport a shipment of COVID-19 vaccines donated by the Chinese government at the airport in Kabul on December 8, 2021. Photo: VCG
Calls for US to return Afghan assets

Reports have revealed that millions of lives are at stake, and children are already dying of malnutrition. The head of the World Food Programme has described the situation in Afghanistan as “the worst humanitarian crisis on earth.”

Data revealed that with rampant unemployment and food prices spiraling out of control, around 97 percent of Afghans will be in poverty within a year. More than 8 million people are just one step away from famine, 3 million children under 5 are expected to suffer from malnutrition, and 1 million of these children are at risk of dying.

Graeme Smith, a senior consultant for the global NGO Crisis Group’s Asia program, called the crisis “man-made” as resulting from “the economic isolation imposed by Western governments on the new Taliban regime and – in effect – on the Afghan population.”

Afghanistan needs a viable economy because humanitarian assistance will never be sufficient or sustainable. Unfortunately, many parts of the Afghan economy cannot function because of Western sanctions, asset freezes, and other economic restrictions, he argued on February 9.

Partly due to the US’ withholding of Afghan assets, the Taliban has been restricting bank withdrawals in Afghanistan since August 2021, which has further inhibited local people’s ability to purchase much needed necessities, media reported.

Sanctions have also stalled some crucial longer term development work, causing more locals to be at the brink of famine, Afghanaid suggested, calling for an urgent resumption of support to avoid further catastrophe.

Washington blocked Kabul’s access to roughly $7 billion, mostly held in the US Federal Reserve. US President Joe Biden signed an executive order in February to divert $3.5 billion from the frozen Afghan assets to compensating the families of the 9/11 terror attack victims.

The decision drew public anger  with thousands of Afghans conflagrating in the street in the capital Kabul condemning the US’ decision regarding the frozen Afghan assets as unjust and blatant theft, with people carrying banners and placards with slogans reading “Biden the World Thief of 2022,” “US destroyed Afghanistan,” and “America should return Afghanistan’s assets.”

US’ detainment of Afghan assets is neither justified nor legal. Whether the money belongs to Afghanistan’s foreign exchange reserves or international aid to Afghanistan, the US has no right to do whatever it wants with it. This is also a violation of international law, Li Wei, an expert on national security at the China Institute of Contemporary International Relations, told the Global Times.

The actions of the US have undermined the difficult recovery of Afghanistan, causing further instability and insecurity, and once again proving that the US is a global troublemaker, said Li.